The NDS has objected to this planning application, submitted by Milford Haven Port Authority (MHPA), which would infill listed structures and construct 40m high buildings in the historic Pembroke Royal Dockyard. We consider that these proposals would cause substantial harm to the significance of the Pembroke Dock Conservation Area and the loss of many Grade II and II* listed heritage assets. We contend that the arguments presented for this scheme do not justify such harm and that insufficient evidence has been presented for consideration of alternative brownfield sites. The fact that this is an outline planning application also carries further, as yet unspecified, risks to the historic assets. For these reasons we call on the Local Planning Authority to refuse planning permission.

The proposed scheme would severely damage Pembroke Dock Conservation Area and crucial listed buildings. The Grade II* Graving Dock would be infilled and partially built over, the Grade II Timber Pond infilled and built over, and the Grade II Building Slips Nos 1 and 2 partially demolished and removed. It would also be detrimental to the setting of the adjacent Grade II Carr Jetty, which adds to the group value of these threatened structures at Pembroke Dockyard.

These structures are the last and most important features of the magnificent and unique assemblage of thirteen slips, graving dock and timber pond constructed and functioning 1809–1926. Pembroke Dock specialised in building warships during the transition from wood to iron and steel, sail to steam and turbines. While the eastern slips were sacrificed in 1979 for the Irish ferry terminal and the deep-water berth Quay 1, we now live in a more responsible era, when significant community assets merit planning protection.

The Royal Dockyard established at Pembroke Dock from 1809 was entirely unique: the only one in Wales, the only one on the west coast of Britain, and the only one created solely as a shipbuilding facility. It built over 260 warships for the Royal Navy, including many of the most prestigious warships of the nineteenth and early twentieth centuries, as well as five royal yachts. Many of these vessels were built on the two large slipways at the western end of the yard which are threatened by the current development proposal.

After the closure of the dockyard in 1926 the facilities were turned over to the Royal Air Force, and for some time the former dockyard site was the largest flying boat base in the world, its aircraft playing a significant role in the Battle of the Atlantic. The Royal Marine, and later Army, forts and garrisons established to defend Pembroke Dockyard – many of which were maintained well into current memory – have combined with the Royal Navy and Royal Air Force to give the area a rich military character and flavour. The Dockyard represents the core of this heritage.

The Royal Dockyard was the reason for the establishment of the town of Pembroke Dock; without the former, the latter would not exist. The dockyard brought an entirely new workforce to the area, many of whom were originally from the west of England and brought their families with them, giving the town and wider area its unique demographic and West Country or Cornish surnames.

Despite its Welsh significance, the heritage of Pembroke Dockyard and its surroundings has arguably never been treated with the respect it deserves and has never been comprehensively interpreted in ways accessible to the public.

The NDS views this application as utterly negating existing policies to conserve the listed dock, timber pond and slips which signify the origins of its community. The Society urges that an alternative site in the area be found for the proposed marine engineering facilities and a fresh lens be directed at interpreting and conserving Pembroke Dockyard’s remaining heritage.

As highlighted within the above criteria, this application fails to comply with local and national planning policies for the protection of Pembrokeshire’s historic environment, and the NDS calls upon the LPA to refuse planning permission. 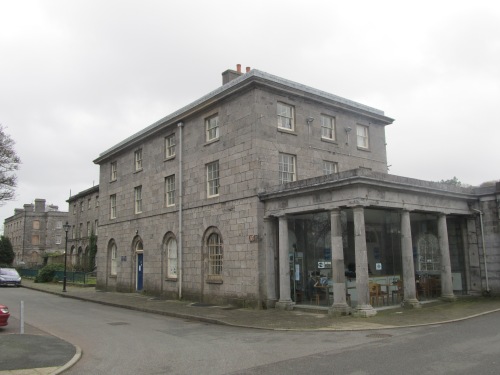 The East Gun Tower, previously open as a museum of local history, but closed since damage in 2011. Image by J. D. Davies.

Join 113 other followers
All text, images and other materials on this website are copyright of the Naval Dockyards Society